In the past eighteen months, the CDFI Banking industry has experienced unprecedented changes in the number of certified institutions, fluctuating from 88 banks at year-end 2012, to 75 banks at year-end 2013 following the CDFI Fund’s recertification efforts, and then increasing to 95 banks as of June 1, 2014. The CDFI Banking industry is currently at its largest ever in terms of number of banks.

NCIF's first quarter report shows an increase in overall size of the industry – in terms of total assets, deposits, and loans – due to both the addition of new banks and to sustantial growth from the existing CDFI Banks. Banks continued to improve their financial stability, strengthening their capital ratios, recovering the health of their balance sheets, and demonstrating their resiliency. 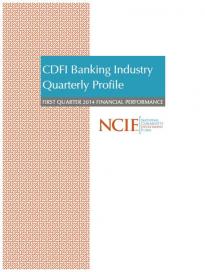