The 2010 Annual Report provides background on the Financial and Social Performance of the CDFI Banking Sector. As of December 31, 2010, there were 85 CDFI banks, with assets of $25.9 billion and loans of $16.6 billion. This year's analysis reveals that CDFI Banks represent a growing sector in terms of numbers, asset size, and outstanding loans. The CDFI Banking sector outperforms several peer groups on social impact as measured by NCIF's Social Performance Metrics: CDFI Banks routinely have DDI and DLI-HMDA percentages 3-5 times higher than peer groups such as "All Banks", "Banks with Assets ≤$ 2 Billion", and "Top-Ten" banks by asset size. Though financial times are difficult for CDFI banks as they are serving low- and moderate income communities which are more vulnerable, the social impact of these institutions warrants greater support from stakeholders in the form of investments, policy changes, and advocacy. 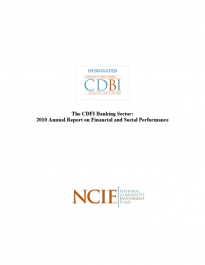