NCIF is proud to release the 2011 Annual Report on Financial and Social Performance of the CDFI Banking Sector. As of December 31, 2011, the CDFI Banking Sector consists of 88 CDFI banks with assets of $30.1 billion and loans of $18.4 billion. These institutions are serving low- and moderate income communities which are more often the most financially vulnerable. Within the narrow margins CDFI banks operate under, the CDFI banking sector demonstrated its financial resiliency during 2011, as it showed growth and improvement in its financial performance, despite the modest growth in number of institutions (85 at YE 2010 to 88 at YE 2011). Additionally, the social impact of these institutions warrants greater support from stakeholders in the form of investments, policy changes, and advocacy. 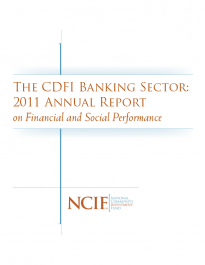