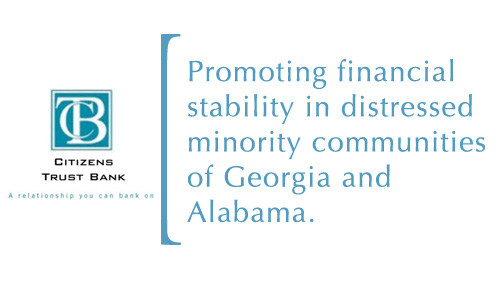 Browse our stories to learn about the importance of mission-oriented banks first-hand, from the clients themselves.

For more than three-quarters of a century Citizens Trust Bank has been serving the metro Atlanta community with banking services. This long history, by any measure of longevity, is one of which all of Atlanta should be immensely proud. The Bank’s Mission is to enhance shareholder value while enabling its customers, community, and associates to realize dreams of economic empowerment.

In 1919, five men envisioned a bank which would primarily serve African American citizens of Atlanta. They would later be called, “the fervent five.” On August 16, 1921, the doors of Citizens Trust Company were opened with $500,000 in capital stock. The goals of the new bank were three-fold: to promote financial stability and business development; to stress the principles of thrift; and to make home ownership possible to a larger number of people.

Citizens Trust Bank became a leader in the financial services industry and one of the largest minority-owned financial institutions in the nation, offering a full range of quality business and consumer products and services including Small Business Association (SBA) financed loans, residential mortgage lending, and consumer and business online banking products with eleven financial centers in Metro Atlanta, Columbus, Georgia and in Birmingham and Eutaw, Alabama.