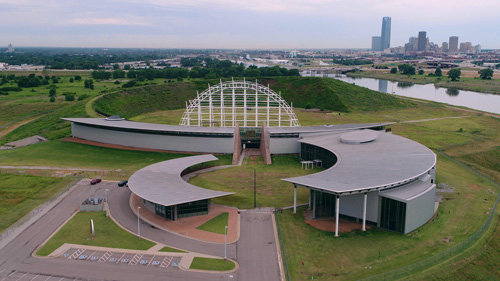 An emerging cultural institution whose mission is to educate about the unique cultures, diversity, history, and contributions of the Native American tribal nations.
Oklahoma City, OK

The American Indian Cultural Center and Museum (AICCM) will be a 125,000 square foot facility situated on a 40-acre parcel that will include landscaped parkland and trails, located on river trust property donated by the City of Oklahoma. Thirty-nine Oklahoma based tribes have provided both exhibit material and financial assistance to the project.  In addition to exhibits, the center will be home to a gift shop, a cafe, meeting rooms and spaces for private ceremonies and the cultural park. The Chickasaw Nation plans to develop the commercial property on the 100 acres directly adjacent to the AICCM intended to help revitalize the economically distressed district of Oklahoma City. After years of stalled progress, NCIF has helped finance the funding gap to ensure the completion of the museum by 2021.

American Indian Cultural Center Foundation (AICCF), the project sponsor, was conceived in 1994 when the Oklahoma Legislature created the Native American Cultural and Educational Authority - which was charged with building a museum for tourism, economic development and job creation in Oklahoma City. The center was designed to communicate American Indian values as expressed through language, arts, dance, music, literature, crafts and other traditions thriving in Native American communities throughout Oklahoma today.

NCIF played an important role in a New Markets Tax Credits transaction for the development of the AICCM, as a source of tax credits and extensive New Markets Tax Credits experience.  The transaction provided incremental resources needed to ensure the high-quality completion of all exhibitions in the signature galleries, as well as resources necessary to complete interior construction of a key event and cultural programming space.

The AICCM’s ultimate goal is to provide an immersive experience for its visitors and enlighten the broader public about the unique cultures, diversity, history, contributions, and perseverance of the 39 tribes in Oklahoma.  The AICCM will be an innovative model for the respectful stewardship of traditional stories, ceremonies, and customs, while also expanding opportunities for the scholarship and study of Native American history and cultural lifeways for all audiences.